The Airbag: A History... 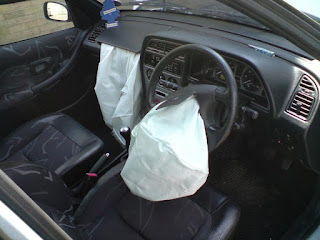 For such an important invention, it's amazing how little most people know about the airbag and its invention. This life-saving tool has only been with us since 1951. Here's the background...

A German man, Walter Linderer, file a patent on October 6, 1951. His patent was granted 2 years later and interestingly enough, it followed another patent was filed in the US by another man, John Hetrick.
Linderer's design, which used compressed air to inflate when a car bumper was hit, proved to be impractical upon testing but Hetrick's design was much more practical.

Hetrick designed what we know as the airbag today. His experiences in the US Navy informed his invention. He saw how compressed air worked with torpedoes during his time in the Navy. Unfortunately though his patent went nowhere as no major corporation would invest in his technology.

In 1967, an engineer named Allen Breed invented a real-time crash detection system. It was in the decades after that airbags started to be adopted by GM and Ford.

Of course, one of the things we service at our shop are the security apparatuses of the car. You can find out more about our Audi VW services here.

http://www.audivwsc.co.uk We are London's Main Dealer alternative for Audi, Vw, Seat, Skoda repairs and servicing. Proud to be the London's best Independent Audi-VW-Seat-Skoda Specialist Don't waste your time and money ! We know how to repair where others have failed ! Our Audi Vw Specialist Centre has a team of specialists who can sort out anything from basic servicing to advanced technical problems. One of the best Audi/Vw Master Technician on site offering knowledge and experience using the latest Main Dealer compulsory diagnostics equipment. Save up to 50% on Main Dealer prices. We only use genuine parts offering 2 years Warranty. All work carried out without compromising the Manufacturers Warranty. Visit us now for latest offers! http://www.audivwsc.co.uk